"Brace for impact with the Hammerhead Corvettes Expansion Pack for Star Wars™: Armada! Named for its distinctive silhouette, the Hammerhead corvette is officially classed as a transport, but features combat-worthy engines, hull, and armament. Often fielded in groups by the Rebellion, Hammerheads lend themselves to formation tactics with their agility and responsiveness. You’ll be able to explore some of these formation tactics with the expansion’s two pre-painted Hammerhead miniatures, and you’ll find them supported by two ship cards, as well as a full complement of fourteen upgrade cards heavily focused on close-range combat!" 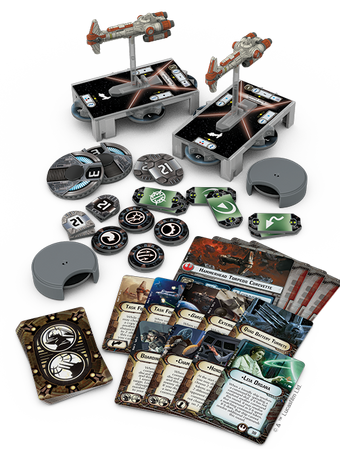 "Named for its distinctive silhouette, the Hammerhead corvette features a durable design that has kept the ship relevant for centuries. While the Hammerhead is officially classed as a transport, its potent engines, sturdy frame, and heavy armament also serve it well in combat. Often fielded in groups by the Rebellion, Hammerheads are agile and responsive enough to lend themselves to formation tactics and mutual support roles within a larger fleet.""You'll be able to explore some of these formation tactics in Armada with even just one Hammerhead Corvettes Expansion Pack. Along with its two pairs of ship cards and a full complement of fourteen upgrade cards, the expansion introduces two pre-painted, small-base Hammerhead corvette miniatures."

"Just like the Quasar Fire-class cruiser-carrier, these ships can use their dual-slotted Weapons Team / Offensive Retrofit upgrades to punch above their weight. And as you might expect from a ship that Rogue One featured in a head-on collision with a Star Destroyer, the Hammerhead corvette fits perfectly into a no-holds-barred, frontal assault. Its forward battery armament of three dice can be bolstered at close range with the missiles from its External Racks, and then if your Hammerhead bears the Garel's Honor Title upgrade, it can deal a faceup damage when it slams into its enemy."

"Given how crippling the critical hits in Armada can be, the Garel's Honor may quickly become one of your most-feared small-base ships, especially if it can flip additional damage cards faceup through the efforts of your Boarding Engineers."

Retrieved from "https://starwars-armada.fandom.com/wiki/Hammerhead_Corvettes_Expansion_Pack?oldid=18485"
Community content is available under CC-BY-SA unless otherwise noted.