Setup: The 3' edges of the play area become the player edges. The second player places all obstacles. Obstacles must be placed beyond 2 range ruler lengths of both player edges, and beyond distance 1 of other obstacles.

Special Rule: The second player assigns a total of 4 objective tokens to his ships and squadrons. He must assign them to ships, if able, and no ship or squadron can have more than 1. The first player gains 1 victory token for each objective token that cannot be assigned.

When a ship or squadron with an objective token is destroyed, the first player gains 1 victory token.

The End of Game section of this campaign objective card should be followed by this sentence: “If scores are equal, the first player wins.”

The first player gains 1 victory token for each enemy ship that retreats to hyperspace.

The second player does not gain 1 victory token for each ship within 2 range ruler lengths of the first player’s edge that retreats to hyperspace at the end of the game. 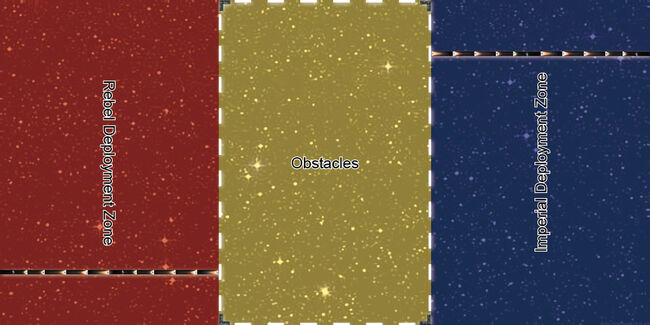 Hyperlane Raid is a Special Assault Objective for "The Corellian Conflict" Campaign. Its use is limited to the Rebel team only! It cannot declare this special assault against a target location that has a base,
outpost, or presence sticker on it. The target location must be in the Corellian System box or on one of the two hyperlanes.

Retrieved from "https://starwars-armada.fandom.com/wiki/Hyperlane_Raid?oldid=12609"
Community content is available under CC-BY-SA unless otherwise noted.