"The Imperial Light Carrier Expansion Pack introduces one pre-painted Quasar Fire-class cruiser-carrier miniature to your games of Star Wars™: Armada. A mobile starfighter base frequently used as a garrison vessel, the Imperial light carrier bristles with laser turrets that allow it to defend itself while its fighter craft are away on crucial missions. It comes supported by two ship cards and a total of ten upgrades, including a dual-slotted Weapons Team / Offensive Retrofit upgrade that allows you to disrupt your opponent’s ships with the game’s first boarding action!" 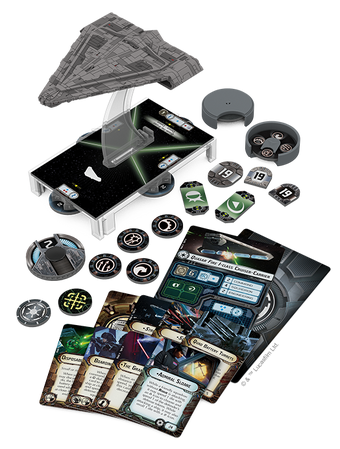 "Capable of acting as a mobile starfighter base over occupied worlds, the Quasar Fire-class cruiser-carrier is an ideal garrison vessel. It can support operations even in the most primitive conditions, and it bristles with laser turrets that allow it to defend itself while its fighter craft are away on crucial missions."

"The Imperial Light Carrier Expansion Pack brings the Quasar Fire-class cruiser-carrier to your tabletop as a pre-painted, medium-base starship with six hull, three dice in its forward battery armament, and a whopping squadron value of "4." "

"It's supported by two ship cards and a total of ten upgrades that provide a new commander, three Title upgrades, some additional offensive firepower—and the game's first dual-slot upgrade. Requiring and occupying both the Weapons Team and Offensive Retrofit upgrade slots, the Imperial Light Carrier's Boarding Troopers can wreak havoc upon an enemy's defenses, punishing anyone who flies his or her ship too close to the Quasar Fire-class cruiser-carrier that you'd rather keep back behind your fighter screen."

Retrieved from "https://starwars-armada.fandom.com/wiki/Imperial_Light_Carrier_Expansion_Pack?oldid=18484"
Community content is available under CC-BY-SA unless otherwise noted.